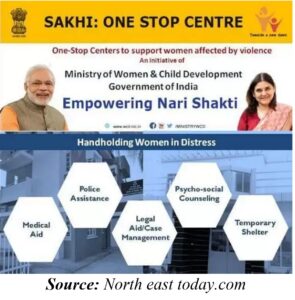 Gender-Based Violence (GBV) is a global health, human rights, and development issue that cuts across geography, class, culture, age, race, and religion to affect every community and country on the planet. Gender-based abuse is defined in Article 1 of the 1993 UN Declaration on the Elimination of Violence as “an act of gender-based violence in public or private life.” The Ministry of Women and Child Development (MoWCD) has announced the launch of a Centrally Sponsored Scheme for the establishment of One Stop Centres (OSC), a sub scheme of the Umbrella Scheme for the National Mission for Women’s Empowerment, which includes the Indira Gandhi Mattritav Sahyaog Yojana. The scheme, popularly known as Sakhi, has been in effect since April 1, 2015. These OSCs are being established across the country in stages to provide integrated support and assistance to women affected by violence in both private and public spaces. The current paper concentrated on the functioning system of India’s one-stop centre.

The Government of India’s Ministry of Finance has established the “Nirbhaya Fund” with an initial corpus of Rs. 1000 crores. A total of Rs. 1000 crore has been allocated to the Nirbhaya Fund for the fiscal years 2014-15 and 2015-16. The 12th Plan Working Group on Women’s Agency and Empowerment recommended, on a trial basis, the establishment of One Stop Crisis Centres to provide shelter, police desk, legal, medical, and counselling services to victims of violence under one roof, integrated with a 24-hour Helpline.

The Justice Usha Mehra Commission, established to recommend measures to improve women’s safety, recommended in its report submitted on February 22, 2013, the establishment of a “one-stop centre” at a notified hospital to assist victims of sexual assault and ensure swift punishment for perpetrators.

One Stop Centres (OSC) are designed to assist women who have been victims of violence in both private and public spaces, as well as within the family, community, and workplace, in all forms of violence. Women who have reached out or been referred to the OSC and are experiencing violence as a result of attempted sexual harassment, sexual assault, domestic violence, trafficking, honour-related crimes, acid attacks, or witch-hunting will be provided with specialised services. In the first phase of this scheme, one OSC was to be established in each state/UT to facilitate access to an integrated range of services such as medical, legal, and psychological support. In India, there are currently 170 One Stop Centres in operation. The OSC worked in tandem with 181 and other existing helplines. Women who have been victims of violence and require services could be referred to OSC via this helpline. Currently, the Ministry of Home Affairs is developing an Emergency Response System that will function as a single emergency number for the purpose of ensuring women’s safety, and this will eventually be integrated with OSC.

Objectives of the One Stop Centre

The Scheme’s main goals are as follows:

Services Under One Stop Centre

Funding for the Scheme

The scheme is funded by the Nirbhaya Fund. Under the Scheme, the Central Government will provide complete financial assistance. The District Collector/District Magistrate is in charge of day-to-day implementation and administrative matters.

Evaluation on working of One Stop Centre

Domestic Violence Cancelling Centres (DVCC) were established by the central government in 2009, and they were renamed Nirbhaya Centres (NC) in 2015. The MoWCD launched the Sakhi-One Stop Centre scheme on April 1, 2015, to provide a common platform for understanding, discussing, and deliberating on strengthening multisector responses to violence against women. It aims to facilitate access to an integrated range of services including medical aid, police assistance, legal aid, and case management, psychosocial counselling, and temporary support services to women affected by violence. There are currently 170 Sakhi OSCs operating in 32 states/UTs. Approximately 70,000 cases have been reported at these centres so far. However, despite the fact that the Sakhi OSC scheme was launched with the best intentions and goals, it did not reach the target population as expected, due to the following reasons: